Early on, as they discussed whom Mr. Comey’s point of contact should be at the White House, Mr. Trump said that ‘Reince doesn’t know we are having dinner’ but that Mr. Comey should plan to go to him.

We struggle with the pronoun whom and the verb to be.

In colloquial speech, the verb to be is frequently transitive. “It’s me,” we say, though we’re all at least dimly aware that in formal speech or writing it’s intransitive. We’re taught to say, “This is he,” or “This is she,” when somebody on the phone asks to speak with us, even though it sounds odd.  Most of us recognize “‘Tis I” as a correct, if very archaic-sounding, way to announce oneself. 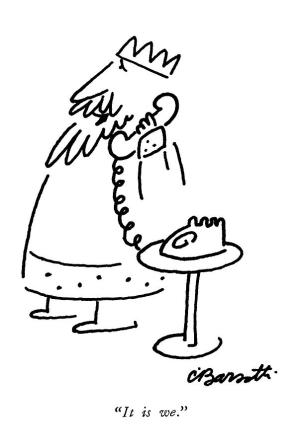 The French solved this problem ages ago: “L’etat c’est moi,” is bad politics, but good French. You cannot correctly say, “C’est je,” in French, even though proper Spanish requires the equivalent “Soy yo,” and Italian, “Sono io“. (These are not strictly equivalents to the French expression. In French, “C’est je,” literally would mean “It is I.” In Spanish, “Soy yo,” literally means, “I am I,” and the same for Italian “Sono io;” but they’re functionally equivalent to “C’est moi,” and “It’s me.”) The British have apparently decided definitely to side with the French (!), and both say and write “It’s me,” “It’s him,” “It’s her,” in all cases.

The pronoun whom is supposedly on its way out, and has been for a hundred years, but it refuses to die, at least on this side of the Atlantic. It shouldn’t be hard to cope with, but it seems to be. The choice between who and whom is analogous to that between he and him. In the excerpt quoted above, the question, as posed by the writer, is “Whom should Mr. Comey’s point of contact be?” If we turn that into a statement, we get “He should be Mr. Comey’s point of contact,” not “*Him should be . . . ;” so the writer ought to have known not to write “whom”.

If we changed the verb to one that’s unambiguously transitive, like accuse, then the writer’s use of whom would be correct: “Early on, as they discussed whom Mr. Comey’s point of contact should accuse . . . .” (I make no comment for now regarding the use of “point of contact” in the sentence, other than to observe that the skin crawls.)

Unfortunately, the business is complicated by our ambivalence about the verb to be.

It is perfectly acceptable to say, “Mr. Comey’s point of contact at the White House should be him.” (No, it isn’t, but for the moment we’re leaving aside the question of whether or not a human being can be a point.) Whether or not it’s acceptable to write “. . . should be him,” in the Newspaper of Record is perhaps a different question, but the spirit of the times (not to mention, if you’ll forgive me, the policy of the Times) seems to favor it. Perhaps that’s why the writer imagined that whom was the correct pronoun for his sentence.

He was wrong. Our flexible language permits either a transitive or intransitive use of to be in this context; but if the writer is going to be colloquial and make to be a transitive verb (“It is him.”), then he must maintain the same colloquial tone throughout the sentence (and the article): he can’t suddenly get formal and start using whom. The problem here is thus not only one of grammar but also one of style.

Let me just observe in closing that it is always wrong to begin a sentence, a title, or a headline with a numeral. Always.

Is there a word that rhymes with monger?  As it’s usually pronounced on American TV and radio, there isn’t.  There, the first syllable sounds like the first syllable of monster, the second like the second of anger.  That pronunciation appears to have become standard in contemporary American English, at least on the broadcast news, which is where it usually crops up, most recently in the unfortunate term fear-mongering.  (See, e.g.,  Glenn Greenwald’s recent use of it on the Rachel Maddow Show.  No reflection on Mr. Greenwald, who can’t be blamed, and whose column I read every day.)  [I did in 2008, anyway.  He doesn’t have a column at the moment, as far as I can tell.—JDC 20140112]

I think that’s happened because monger is a word Americans tend to encounter first in print, rather than in conversation, and we have to guess at its pronunciation.  As far as I can tell, most of us are guessing wrong.

The proper pronunciation of monger (unless you subscribe absolutely to the view that whatever most speakers say is ipso facto correct) rhymes with hunger. Dictionary.com and its audio pronunciation guide still know this.

In England, where ironmonger’s is still a part of the common vocabulary (we say hardware store), they haven’t forgotten how to pronounce it.  I imagine, too, though I don’t know how to check, Americans with the surname Monger still remember how to pronounce their name—though, of course, one’s name is one’s own, and if the Pepys family want to call themselves “Peppis”, as Fowler reports, rather than “Peeps”, we may lament it, but we can’t say it’s an error.